The development of the elephant ancestors started abt 60 million years ago, when Ungulata, (Latin: meaning "provided with hoofs"), evolving from the large primitive mammal herbivores named Condylartha, forked in five groups: (Eisenberg 1981)

Paenungulata is rather new group within the classification of elephants ancestors, and is supported by DNA-research (reference-link).

The DNA-tests has made it clear that the hyraxes branch off earlier, while proboscidea and sirenia still unite in Tethytheria.

Early embryology of the elephant 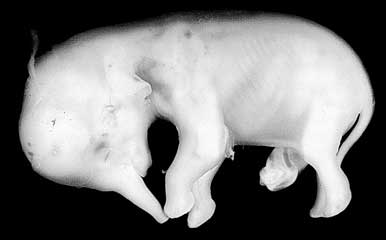 Recent Studies (1999) of african elephant fetus indicates that the elephants may have developed from aquatic animals, and that they are closely related to the Sirenia (dugong and manatees), and that the order Proboscidea ("trunkanimals") and the sea cows (Sirenia) must share a common ancestor. Link: The developing renal, reproductive, and respiratory systems of the African elephant suggest an aquatic ancestry (Gaeth, Short, and Renfree, University of Melbourne, Parkville, Victoria 3052, Australia). This suggest that Elephants are not so closely related to hyraxes as was thought before, but definitely close related to Sirenia.