Pinnawela orphanage is situated in Rambukkana, northwest of the town Kegalla, halfways between the present capitol Colombo and the ancient royal residence Kandy in the hills of central Sri Lanka. It was established 1975 by the Sri Lanka Wildlife department. This 24 acres large elephant orphanage is a also breeding pace for elephants, the first elephant baby was born in 1984, and it has the greatest herd of elephants in captivity in the world. Between 1975 and 2012, 67 animals were born here.

The Pinnawela Elephant Orphanage was started in 1975 by the Department of Wildlife on a twenty five acre coconut property on the Maha Oya river at Rambukkana. The orphanage was primarily designed to afford care and protection to the many baby elephants found in the jungle without their mothers. In most of these cases the mother had either died or been killed. In some instances the baby had fallen into a pit and in others the mother had fallen in and died. Initially this orphanage was at the Wilpattu National Park, then shifted to the tourist complex at Bentota and then to the Dehiwala Zoo.

From the Dehiwala Zoo it was shifted 1975 to Pinnawela. At the time it was shifted the orphanage had five baby elephants which formed its nucleus.It was hoped that this facility would attract both local and foreign visitors, the income from which would help to maintain the orphanage.

There are only a few elephant orphanages in the world. Pinnawela has now become one of the bigger orphanages
and is quite well known world wide.

In 1978 the Pinnawela Elephant Orphanage was taken over by the National Zoological Gardens from the Department of Wildlife and a captive breeding program launched in 1982. 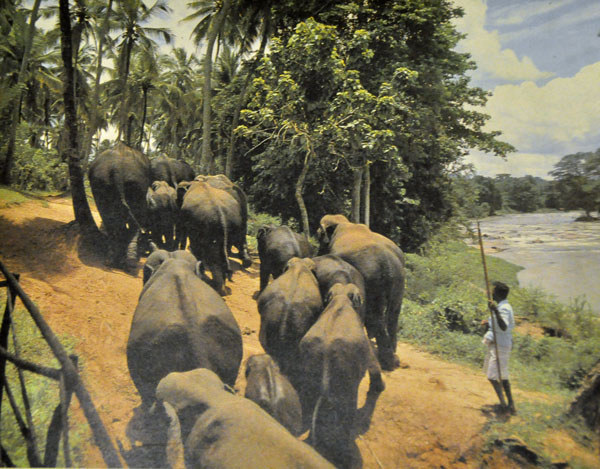 (Photo from the book les animaux sauvages ; l'éléphant) The Pinnawela herd and chief mahout K.G. Sumanabanda, 2011, in 1981. Not one single hotel, and only palm trees along the river. The elephants on the picture are 13; Vijaya, Neela, Hema, Mathalee, Randivi, Mahaweli, Kumari, Diula, Anuscha, Kadira, Komali, Weera (later Kandula I at the army camp), and Jadura.

When the zoo took over there were twelve animals five of whom were babies. In time more baby elephants were added to the original herd of five. It was observed that though older females could be added it was not possible to add older males to the herd.

1997 there were 52 animals of which there 10 were babies under 3 years of age. There were five mahouts for the twelve elephants when the orphanage was taken over 1978 and later there were twenty mahouts.

Stables close to the road and the office: 1. Milkshed, where visitors can milk feed elephant babies. 2 (roofed) and 3 ar round chaining grounds. 4. stable for the blind elephant Raja. 5, 6 and 7 are stables for mixed groups. 8. for adult dangerous bulls. north of the trail leading to 6 are chaining points for bulls in musth.

The difference between the elephant orphanage in Pinnawala and Ath Athuru Sevena Transit Home at Uda Walawe is that at the Transit Home these baby elephants once cared for are released to the wilds when they reach a certain age.

At Pinnawela an attempt was made to simulate, in a limited way, the conditions in the wild.
Animals are allowed to roam freely during the day and a herd structure allowed to form. 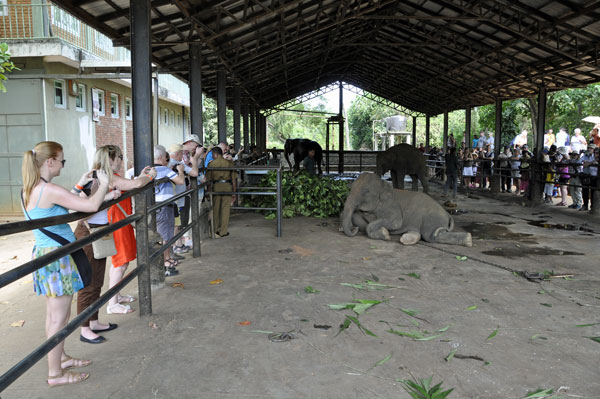 08.00 The babies are fed on milk in the mornings and allowed to range freely on the 12 acres large grassland. 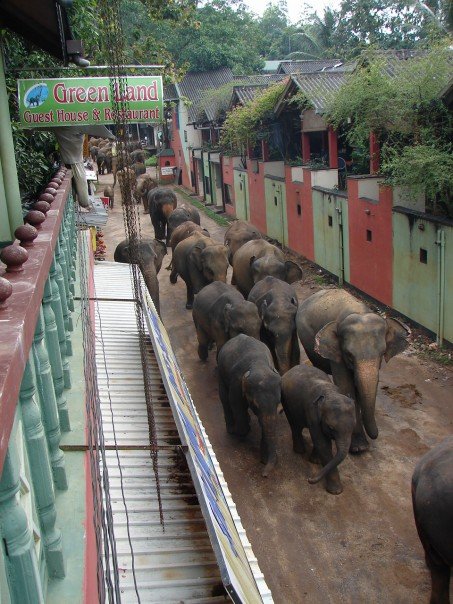 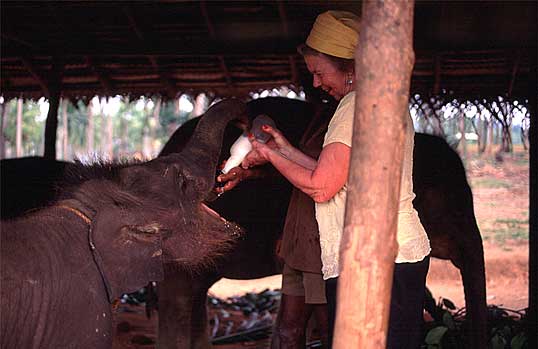 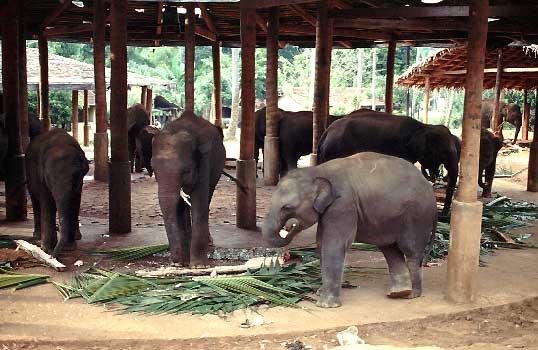 Beteween 16.30 and 1800 in the evening the animals are taken to their stalls and tethered for the night.

They are then given their evening feed which is milk again for the babies and leaves for the older ones. Plenty of food and water is available.

The leaves are mainy Cocunut leaves (Cocos nucifera), but also branches from Jackfruit
(Artocarpus integra), leaves, branches and logs of Kitul palm tree (Caryoty urens),
from There is no stress or threat to the animals.

The elephants are stall fed. There is very little food material that they can gather from the premises of the orphanage except grass. Large quantities of food are brought in daily. Jackfruit, coconut, kitul, tamarind and grass form the bulk of the food given to the elephants at Pinnawela.

Each animal gets approximately 75 kg of green matter a day and in addition each gets 2kg of a food mixture containing maize, rice bran, powdered gingelly seed and minerals. They have access to water twice a day from the river Maha Oya that runs by the Orphanage.

There is one female named Sama which was brought in from the northern part of the country, where there is an ethnic conflict, with the lower part off ts front foot blown off by a land mine. This animal is growing up and is coping with that leg about six inches shorter than the other.

The conditions at Pinnawela are conducive to breeding.
Initially the breeding animals consisted of males Vijaya and Neela and females Kumari, Anusha, Mathalie and Komali. Upto the middle of 1998 there have been fourteen births, eight males and six females at Pinnawela, with one(1) second generation birth early 1998.

The father of the first three calves born at Pinnawela was Vijaya. It was not possible to determine the father of the next calves since many males used to mate with the females in oestrus. Now through DNA fingerprinting the fathers of three have definitely been identified.
Vijaya and Kumari have produced three calves at intervals of five and four years.

There are other records of the birth of elephants in captivity in Sri Lanka but most of these are off females that had been captured after they had conceived in the wild. There are also records of tamed elephants having mated with other tamed elephants and giving birth. These are however few and far between.

The other elephant deaths in recent times are as follows with the relevant date and cause of death: Vijaya - September 11, 1999, brain cancer, Honda Kota - February 20, 1999, severe injuries to the trunk and body at the time it was handed over by the Wildlife Department, Binari - January 3, 2003, head injury and paralysis, baby elephant born to Lasanda - March 20, 2004 dashed on the ground by the mother and baby elephant of Nikini - April 22, 2004, born dead.

In 1997 and 1998 research was conducted in Pinnawela through a joint venture by Institute of Wildbiology at Vienna University in Austria and the Zoological Institutes of Colombo and Peradeniya in Sri Lanka, under the supervision of Dr. Fred Kurt. Veterinary students from the Universities collected datas about body messurements and growth, food assimilation, social interactions, sleeping behaviour, tool-using, and sterotypical behaviours, later publicated in different scientific medias.

Here in Pinnawela is also the three-legged elephant Sama, who by two years of age stepped on a landmine which blew her right frotfoot away. Since then she is walking on three legs. She is now twelve and will suffer from considerable discomfort in the future due to changes in her spina, because of her annatral body position, trying to balance the body weight on three legs.

There is ambitions to train her for a specially made Prostestis, see http://www.luckysama.de for more information.

Fred Kurt, (1974) Remarks on the social structure and the ecology of the Ceylon elephant in Yala national Park.
IUCN Publications new series 24 (1) 618-634.