An American Mastodon in its typical Pine tree environment. 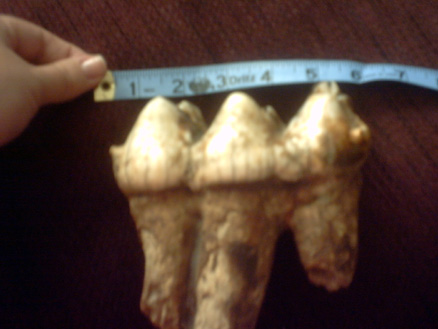 A molar from a Mastodon. Photo: Launa Nehi

The genus Mastodon, (from Greek Mastos, meaning breast, and odon: tooth, referring to the the nipple-shaped protrusions on the crowns of its molars) belongs to the family Mammutidae, which is a family within the mammal order Proboscidea. Although Mastodons share their ancestor, Palaeomastodon, with the elephants they remain a side line of their own, and has less relation with the recent elephants, and the Mammoths.

7 million years ago the Mastodons spread to north America, and later to south America. The mastodons were about the same size as the elephants and the mammoths, but more muscled, and most species had fur. The upper jaw had two big tusks, the lower jaw had two smaller tusks. Mastodons had never more than two molars in the jaw at the same time.