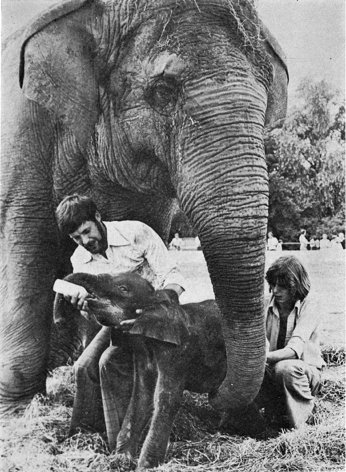 So when the Asian elephant cow "Sheba" in Chester Zoo, England, 1978 gave birth to a calf with an African elephant bull" Jumbolino" as father the scientists became puzzled.

The staff had observed several matings between the elephants, but since a cross was impossible, noone expected a delivery.

The male calf, named Motty, had an African elephants cheek, ears and back,while nail numbers, (5 front, 4 hind) and the single trunk finger were like Asians.

This sensational elephant died two weeks after the birth. It was an early birth and Motty had stomach problems. Thres no real evidence however, that there is any genetical difference preventing this type of crossbreeding, since the two species has the same numbers of chromosomes.

A conculsion from this, is that the present taxonomy, dividing the Asian and the African elephant into two different genus, Elephas and Loxodonta, should be reconsidered, like the case of scientific name for the Polar bear;
Constantine John Phipps was the first to describe the polar bear as a distinct species in 1774. He chose the scientific name Ursus maritimus, the Latin for 'maritime bear The polar bear was later considered to be in its own genus, Thalarctos. However, evidence of hybrids between polar bears and brown bears, and of the recent evolutionary divergence of the two species, does not support the establishment of this separate genus, and the accepted scientific name is now therefore Ursus maritimus, as Phipps originally proposed.


Dr Derek Lyon was veterinary in charge at Chester Zoo during Mottys birth.

"I hope you find the following of some interest as several people believed that our cross-bred never occured!
Believe me it did.The following is a brief resume.

Mother "Sheba"-arrived Chester Zoo 13/2/65 aged 9yrs. Had a dead Asian babyborn 26/10/74-father "Nobby"(Asian).
Sheba's second pregnancy was result of mating with African bull"Jumbolina"(Bubbles).Bubbles arrived at Chester on 14/8/64 from the NorthRhodesian Wildlife Conservation Society."Motty" was born on 11/7/78.The suspicion of pregnancy was somewhat doubted at the time as it was ONLY possible for her to be pregnant to with "Bubbles" and crossbreds were not believed to have been possible."Nobby" had been destroyed at a time earlier that would have been impossible for him to have been the father.

Clinical signs during "Sheba's" pregnancy consisted of the appearance of afluid filled area along the ventral abdominal wall in Feb 1978.By May 1978this swelling had persisted and increased in size to about 2 feet in lengthand 7-8 inches wide.By 1/7/78 the swelling had gone(oral diuretics had been given previously) and abdominal enlargement was noted, particularly on the left hand side.

For several months during the later stages of her pregnancy "Sheba" spent aconsiderable amount of time on her own.On 10/7/78 parturition initiallystarted with production of small amounts of a milky vulval discharge."Motty"was born in the outside paddock at 9.20am on 11/7/78.

Foetal membranes wereremoved by the keepers and the placenta followed almost immediately. The other Elephants were taken and kept inside away from "Sheba" and calf who both remained outside.From the calf's size it was thought to bepremature(?).Initially, hourly feeds of glucose were given and later that daysupplemented by hourly feeds consisting of cow's milk/Shebas colostrum/Duphalyte (electrolytes, vitamins, amino acids and dextrose) and A-vitamin supplement(Abidec).

The calf during this time had not yet stood. By9.20pm on 12/7/78 the calf was standing and walking after 36 hrs of recumbencysince his birth during which time the keepers had aided and encouragedstanding by packing straw beneath the calf. On 13/7/78 "Sheba" and "Motty" were introduced to the rest of the herd on the outside paddock and the calf later allowed to the inside house for the first time.

Hourly bottle feeding continued up to 12.30pm on 14/7/78 when it was possible for the calf to suckle from"Sheba" for the first time.

On 18/7/78 the calf developed an umbilical infection-treated with oral and topical antibiotcs.

After 48hrs the calf appeared to have recovered and wasfeeding and sleepng normally. At 9.00am on 21/7/78 the calf was found comatoseand dying and despite being given extra warmth,cardiac stimulants, artificialrespiration and chest massage died an hour later. Post mortem revealed death tobe due to necrotic-enterocolitis and E coli septicaemia.

All very,very sad."
1998-01-17 Derek Lyon
Consultant Derek Lyon was Veterinary surgeon at Chester Zoo for 30 years, and is now an active member of the British Veterinary Zoological Society.

Motty is now at the London History Museum


Details from Phil Walley, Elephant Keeper of the Chester Zoo