Join the herd! Walk, bike, swim, or hike in honor of elephants around the world on Elephant Appreciation Day, September 22, 2020. By signing up for this virtual 5K event, proceeds will go to The Elephant Managers Association (EMA) to aid in our mission: enhancing the welfare and survival of the world's elephants through improving communication, husbandry, research, education, and conservation. More info here

During World war II, Dresden became victim to one of the worst bomb attacks during the war. On February 13-14, 1945, Allied bombers laid siege to the German city of Dresden. A famous animal trainer, Otto Sailer-Jackson ran the beautiful Dresden Zoo. Sailer-Jackson was under orders that if human life was endangered, all carnivores must be shot. Before he had to face that horrible decision, however, a wave of bombing set the zoo ablaze.

"The elephants gave spine-chilling screams. Their house was still standing but an explosive bomb of terrific force had landed behind it, lifted the dome of the house, turned it round, and put it back on again. The baby cow elephant was lying in the narrow barrier-moat on her back, her legs up to the sky. She had suffered severe stomach injuries and could not move," he later stated. Three hippopotamuses were drowned when iron debris pinned them to the bottom of their water basin. In the ape house, he found a gibbon that, when it reached out to the trainer, had no hands, only stumps.
Nearly forty rhesus monkeys escaped to the trees but were dead by the next day from drinking water polluted by the incendiary chemicals. For those animals that made it to the next day, the assault was far from over. A U.S. aircraft pilot came in low, firing at anything he could see was still alive. "In this way," Sailer-Jackson explained, "our last giraffe met her death. Many stags and others animals which we had managed to save became victims of this hero.

In spite of the horrible bombings, the elephant house from 1871 survived, and in 1926 the outside cage was replaced by a dry moat enclosure. The stable was germanys oldest elephant house until director Dr Herbert Luecker decided to tear it down in 2000, after the new house was built. 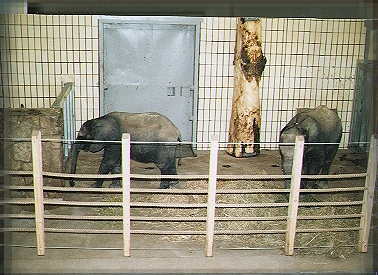 Dresden Zoo built a new elephanthouse 1999, with 600 m2 for the elephants. It has an inside pool and nighttime the elephants stands unchained in individual boxes. The house also houses Mandrills, a cafeteria, and attached is a new main entrance and a new restaurant, "Drumbos Weld". All elephants are almost daily taken for walks in the zoo. Outdoor enclosure is about 3 000 m2.