The elephants are worked in free contact, also in training shows, and afternoon shower and bathing of the elephants in the pool inside the stable can be enjoyed by the public. The house is rather old, from the thirthies, and a new one is on planning stage.

Until a few years ago the elephants gave public rides. 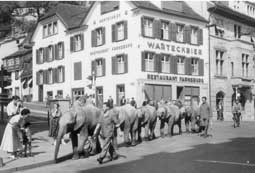 1952: During director Dr. Ernst Lang hippos and rhinos were removed from the pacyderm house, and five young elephant calves were imported 1952 by the zoo itself, from southern Tanganyika. 7 elephants were cought in 21. September 1952, under the command of the animal capturer Pelegrini, 5 with destiny for Switzerland; females Ruaha and Indunda, the three males Omari, Katoto and Tembo, (the last bull Tembo reserved for Circus Knie). The elephants were brought to Mombasa, and shipped with "Rjinkerk" through the Suez, to Genua, and arrived with train in Basel SSB on 1. November 1952.

1966: The first elephant was born here 1966, an african, which was the third african elephant ever being born in a zoo!

The bull Kenny, (arrived Basel 1984 from Hannover Zoo, Germany, where he arrived 1970 from Mary Chipperfield, England) died in June 1998 because of severe problems in his hind leg. He was kept off-hand. With the cow Mahari he Sired the bull Pambo, born 1992.04.09, now located in Cabarceno Zoo.