The Elephant Transit Home (ETH) owned by the Department of Wild Life Conservation (DWLC) was established on October 6, 1995 at the Udawalawe National Park.

24th of September 2003 the elephant transit home opened, completely funded by the Born Free Federation of UK, who also funds post-release studies run by the University of Colombo, monitoring the orphans with the help of radio collars once they have been returned to the wild.

The difference between Ath Athuru Sevena and the elephant orphanage in Pinnawala is that at the Transit Home these baby elephants once cared for are released to the wilds when they reach a certain age.

To date, 103 orphans have been released into the wild. Of that number, management reports 7 animals have died. 15 released orphans have become successful mothers. A total of 16 babies have been born in the wild to these ten mothers. 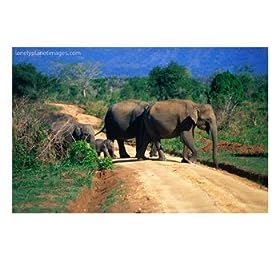